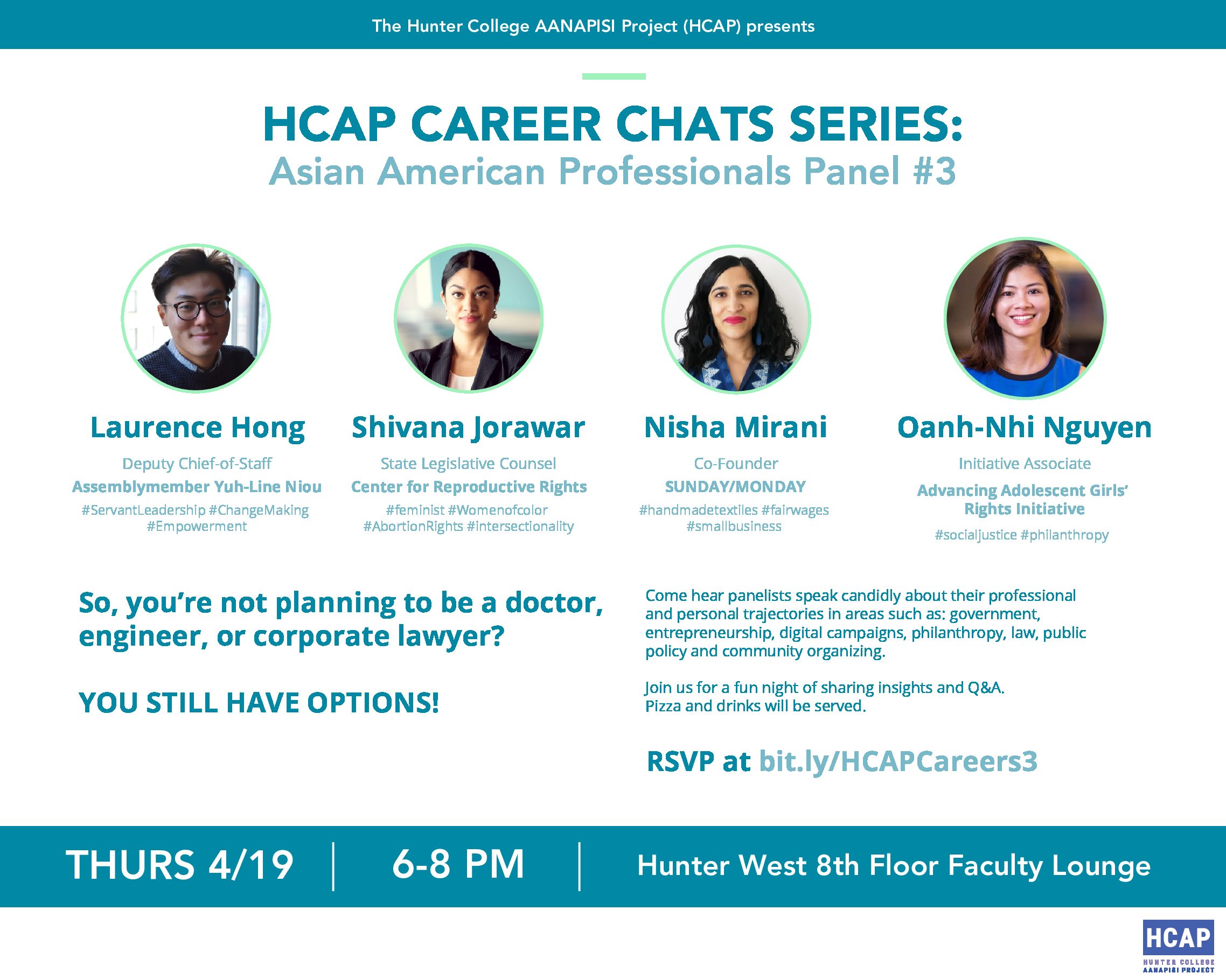 So you’re not planning to be a doctor, engineer or corporate lawyer?

YOU STILL HAVE OPTIONS!

Join us for a fun night of sharing insights and Q&A!

Pizza and drinks will be served.

Shivana Jorawar is a queer second-generation Indo-Caribbean who believes in intersectional feminism and unapologetically speaking truth to power. She currently serves as State Legislative Counsel at the Center for Reproductive Rights, and previously served as Federal Policy Director for the National Abortion Federation. For four years, she directed reproductive justice priorities for the National Asian Pacific American Women’s Forum (NAPAWF). She has worked with Sakhi for South Asian Women and is a Co-Chair of Jahajee Sisters, a grassroots women’s empowerment organization in New York City’s Indo-Caribbean community. Originally from the Bronx, Shivana holds a BA in Political Science from Fordham University and a JD from Emory University School of Law. Follow Shivana on Twitter @shivspeaks.

Nisha Mirani: Nisha Mirani is the co-founder of SUNDAY/MONDAY, a textile studio based in New York. She studied anthropology at Brown University. After working as a research analyst and consultant at a labor union for five years, she attended the Fashion Institute of Design and Merchandising in Los Angeles to earn a degree in visual communications and to pursue her interest in ethically made textiles. Nisha launched SUNDAY/MONDAY in January 2017 with her husband.

Oanh-Nhi Nguyen: Oanh-Nhi serves as the Initiative Associate to the Advancing Adolescent Girls’ Rights Initiative. Prior to joining NoVo, Oanh-Nhi was the Campaign Manager and Kairos Fellow at 18MillionRising.org where she led online campaigns on social justice, civic engagement and interracial solidarity for Asian Americans and Pacific Islander communities. She has also consulted with Kairos Fellowship, ReFrame Mentorship, and Move to End Violence on program design and curriculum development. Oanh-Nhi has a certificate from the University of Pennsylvania’s Executive Program in Social Impact Strategy and graduated from Dickinson College with B.A. in International Studies and Policy Management.