Anti-Asian Violence in the Pandemic Age: Confronting and Curing the Virus of Hate 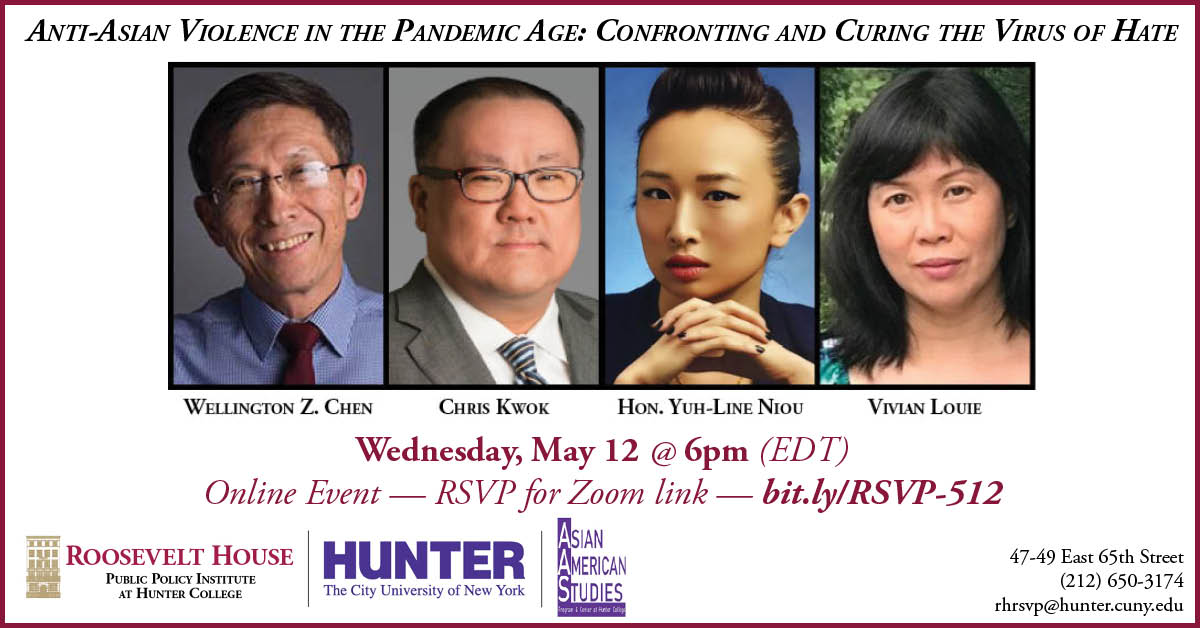 Roosevelt House is honored to present a live Zoom panel discussion, marking Asian American and Pacific Islander Heritage Month, on Anti-Asian Hate in the Pandemic Age: Curing the Virus of Hate—featuring experts, scholars, and policymakers on how to explain and address the recent surge in discrimination and violence against Asian Americans. This event is co-presented with the Asian American Studies Center at Hunter College.

Anti-Asian hate is not new; in fact, it has been with us for more than 150 years and has touched Americans from every part of Asia, striking with particular intensity during times of crisis. How does this moment compare to other critical moments of anti-Asian bigotry throughout modern history? What are the factors contributing to the recent spike in anti-Asian racism, and what can policymakers do to respond?

The panel will illuminate both the daily experiences of Asian New Yorkers and the path forward—including immediate and long-term policy strategies to help stem the spread of hate in our city. In addition, speakers will address how to strengthen coalitions to address all forms of hate—and hate crimes—that are on the rise.

Vivian Louie, moderator, is Professor of Urban Policy and Planning and Director of the Asian American Studies Program & Center at Hunter College. She is the author of Compelled to Excel: Immigration, Education and Opportunity Among Chinese Americans and Keeping the Immigrant Bargain: The Costs and Rewards of Success in America; and co-editor of Writing Immigration: Scholars and Journalists in Dialogue. She serves on the New York State Advisory Committee to the U.S. Commission on Civil Rights.

Wellington Z. Chen is executive director of the Chinatown Partnership, responsible for its overall direction, including strategic planning and policy. He was the first Asian American to serve as a commissioner on the New York City Board of Standards and Appeals. Chen is an architect by training, and worked for I.M. Pei from 1980 to 1985. He has been a member of Community Board 7 for more than 13 years, serves as a Trustee of The Metropolitan Museum of Art, and is a former Trustee of the City University of New York.

Chris Kwok, adjunct professor of Asian American Studies at Hunter, is also a community organizer and co-editor of A Rising Tide of Hate and Violence against Asian Americans in New York During COVID-19:Impact, Causes, Solutions. He received his J.D from UCLA Law School, where he served on the staff of the Asian American Pacific Islander Law Journal. Previously, he was the Alternative Dispute Resolution Coordinator at the U.S. Equal Employment Commission in the New York District office.

Hon. Yuh-Line Niou is the State Assembly Member representing the 65th district in Lower Manhattan and the first Asian American to represent Chinatown, or any part of Manhattan, in the state legislature. Along with her colleagues, Assembly Member Niou helped form New York State’s first-ever Asian Pacific American Legislative Task Force, which will focus on advancing issues impacting New York’s Asian American community. Previously, she served as the chief of staff for Assembly Member Ron Kim.